Due to COVID-19, the first three 2021 exhibits happened in
June, July, and September, with no exhibit August.
June 2021
​​​Sculpture Today - Texas Sculpture Group 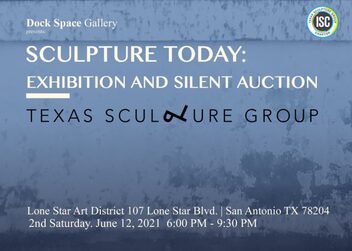 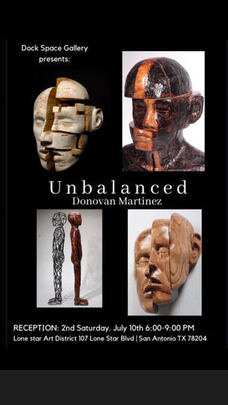 Donovan Martinez is a young San Antonio artist born 1998, and is currently disciplined in mixed media sculpture.  He is self taught in the basics of welding and fabricating at Tom C. Clark High School

He began with oxy acetylene metal sculpting.  After winning multiple state level 4H club competitions, he began to expand on a future career in sculpting.  From then on he continued being self taught in the different mediums of sculpture.  He went through wood carving, blacksmithing, casting, concrete and resins.

After graduating from Clark high school in 2015 Donovan began a professional apprenticeship under figurative metal sculptor Esther Benedict.  He is currently working with Esther Benedict and attending The South West School of Art in San Antonio.  Donovan is continuing his career in sculpture and art.
September 2021
Transmutation, the state of being changed into another form - Peter French
October 2021
​​ESPACIO - Fernando Andrade and Thetagrams - Joel Dunlap​
​Curated by Rick Liberto​
​​ESPACIO - Fernando Andrade

Fernando Andrade was born in 1987 in the border town of Acuña, Mexico, Fernando Andrade has lived in San Antonio, Texas, since he was seven years old.   During Andrade's early childhood years, it was considered safe for children to play outside and he remembers playing outdoor games with his family during those years. Today, however, the neighborhood where Andrade was raised is troubled with ongoing violence brought on by the leaders of drug cartels.

As an artist, Andrade copes with the turmoil in his native homeland with  distinct bodies of work: figurative drawings and abstract paintings.  While the drawings are narrative explorations of the events taking place, the paintings are vehicles for nurturing feelings of hopeful joy and optimism.
Thetagrams - Joel Dunlap​
November 2021 - Paintings by Liza Lewis

Liza Lewis was born in San Antonio, Texas and holds a Bachelor of Fine Arts from Trinity University. As a child, Lewis moved with her family to her father’s various military appointments around the world, including Honolulu, Hawaii and Okinawa, Japan. This travel and early exposure to the foreign and exotic is a natural inspiration for the artist, and is translated through many of her paintings.

AJ Rodriguez, a San Antonio native, has always had a passion for sketching and painting.
Among his solo exhibitions were a series featuring South Texas birds and scenes along the San Antonio River (curated by Arturo Almeida at the Plaza Club in 2015 and UTSA Downtown Gallery in 2016, respectively). More than 18 of his pieces were shown in his Figuras series in 2016 at the Radius Center (curated by Joan Grona). In the Fall of 2017, AJ’s works were featured as an official Contemporary Art Month (CAM) event hosted by the King William Association and he participated as director of visual art for a collaborative project with Henry Brun and the Latin Playerz at Luminaria 2017.  Also,  AJ’s Colores y Imagenes (curated by Nina Hasselle at Dorcol Distillery Co.) demonstrated his exploration of the beauty and brutality of the Spanish bullfight. ​​
2021 ISC Student Sculpture Awards - Hanna Makkonen and Stephen Abernathy 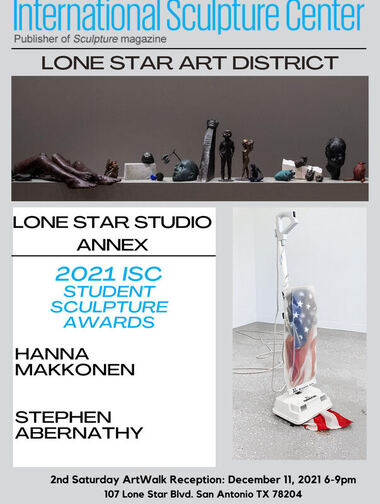 The International Sculpture Center’s Outstanding Student Achievement in Contemporary Sculpture Award was founded in 1994 to recognize young sculptors and encourage their continued commitment to the field of sculpture, as well as to recognize the award recipients' faculty sponsors and their institutions.

​Hanna Makkonen, 2021 Student Award Recipient; Arizona State University; Faculty Sponsor: Mary Neubauer
Hanna Makkonen is a Finnish sculptor working in Prescott, Arizona who operates in Europe and the U.S. Striving to create collaboration between continents, Makkonen has served on the Steering Committee for the International Cast Iron Conference in Berlin and is involved in organizing international symposiums. Her pieces have been shown in numerous countries, where she has received various awards and grants, including the American Scandinavian Foundation grant. She has received her MFA from Arizona State University, U.S. and a BFA from Saimaa University of Applied Sciences, Finland and studied at the Royal Academy of Fine Arts, Belgium.

​Stephen Abernathy, 2021 Student Award Recipient; University of North Texas; Faculty Sponsor: Alicia Eggert
Stephen Abernathy is a multidisciplinary artist that primarily works in the form of sculpture. The artist utilizes a variety of materials and processes from sewing and welding, to found and cast objects, and sometimes video and performance. “My art embodies my own personal experiences, my identity as a veteran, my religious upbringing, and what it is to be a white cis male. The objects challenge and confront the issues and beliefs instilled in me by American society. The sculptures I create often visualize the tension between two opposing forces, like masculinity vs. femininity, interior vs. exterior, and realism vs. idealism.”
The International Sculpture Center (ISC) is a member-supported, non-profit organization founded in 1960 to advance the creation and understanding of sculpture and its unique and vital contribution to society. ISC programming includes awards to lifetime and student sculptors and patrons and educators, ISConnects, the web site www.sculpture.org, conferences and symposia, publication of Sculpture magazine and ISC Press books, and membership services to sculptors, collectors, patrons, architects, developers, journalists, curators, historians, critics, educators, foundries, galleries, and museums-anyone with an interest in and commitment to the field of sculpture.