​Fernando Andrade   Born in 1987 in the border town of Acuña, Mexico, Fernando Andrade has lived in San Antonio, Texas, since he was seven years old.   During Andrade's early childhood years, it was considered safe for children to play outside and he remembers playing outdoor games with his family during those years. Today, however, the neighborhood where Andrade was raised is troubled with ongoing violence brought on by the leaders of drug cartels.  Informed of the dire situation through stories told by friends and relatives, as well as by news reports, books, and online media, Andrade is disheartened that his hometown and other areas south of the U.S./Mexico border have become places of violence where people are disappearing or dying on a daily basis. Drug leaders intimidate and murder innocent victims, often disposing of bodies in barrels of acid or by filling garbage bags with body parts.  For Andrade, the situation became personal in 2012, when a friend of his went missing, never to be seen again.

As an artist, Andrade copes with the turmoil in his native homeland with two distinct bodies of work: figurative drawings and abstract paintings.  While the drawings are narrative explorations of the events taking place, the paintings are vehicles for nurturing feelings of hopeful joy and optimism.

In his figurative drawings, Andrade creates simple narratives based on stories he has heard about border violence.  Believing that everyone has their own childhood memories and can identify with the innocence of youth, Andrade stages his scenarios using children in place of adults, a strategy for enticing viewers to engage in his conversation.  He omits background details allowing viewers to project their own visualizations into each scene, and depicts wooden sticks, which he remembers playing with as a child, as metaphors for guns. In his series A Jugar la Guerrita (To Play a Little War), a young boy appears with a stick that is spewing off-color phrases in Spanish, in reference to the corruption that now pervades the region.   In the series Tierra y Libertad (Land and Liberty), groups of children appear to be playing childhood games but, upon closer inspection, are surrogates for the perpetrators and their victims.  In his God Bless America series, Andrade calls attention to the dangers of guns by superimposing intricately detailed images of branches over barely visible phrases relating to the American gun culture.

In his abstract paintings, Andrade expresses a freedom from the anguish that underlies his figurative works.  Viewing his process as a kind of spiritual meditation, Andrade becomes free to imagine cosmic visions that have rhythmic affinities with music or dance, and which celebrate the splendor and preciousness of life itself.
June 2019 Dock Space Gallery Annex - Norma Moore, Heidi Myklebust, Todd Stevens, and Clif Tinker
June and July 2019 Dock Space - Corinne Whittemore and Aleida Garcia Wedgworth 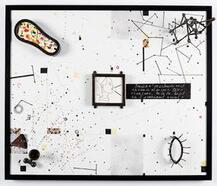 Mixed Bag, a solo show by Texas artist, Stephen Daly. The exhibit explores the interaction between drawing and sculpture incorporating geometric, abstract, and symbolic forms in aluminum, bronze, ink, and watercolor on paper.

“I make sculpture, drawings and objects that combine drawing and sculptural elements”
​-Stephen Daly
Juan Vallejo  - "A Reflection Worth Looking Into"

"My work is inspired by Mexican migrant culture, the long-standing relationship between the United States and Mexico, and the use of the migrant body. With this work, I provide the viewer with insight into the migrant culture I grew up." 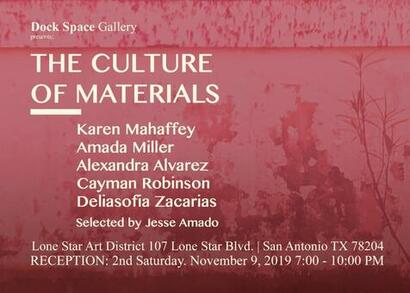 Selected by San Antonio artist and curator, Jesse Amado, special emphasis was given to experimental and innovative work through the use of natural materials, everyday objects, and textiles. ​

Karen Mahaffy draws viewers' attention to the liminal space between image and object; form and function; purpose and futility. Mahaffy earned her MFA from the University of Texas at San Antonio, TX and has exhibited nationally in galleries and museums from Texas to New York, has participated in multiple residencies and awards. She is currently Professor of Fine Art at Palo Alto College in San Antonio, Texas.

Amada Miller is a multi-disciplinary artist based in San Antonio, Texas. She is currently the Artist-in-Residence at The DoSeum and recently completed multiple residencies in the US and Abroad. Miller’s work is a compendium of naturally dyed fabric paintings using zaboca, turmeric, roucou, sorrel, coconut, and other naturally- sourced ingredients produced during her residency in Trinidad & Tobago.

Mexico City based Alexandra Alvarez has exhibited in both the US and Mexico. “These six works, accompanied by a poem, unearth and confront the underlying emotions in living moments” explains Alvarez.

Cayman Robinson is a multidisciplinary artist living and working in San Antonio, Texas. Robinson received an associates degree of Fine Art from San Antonio College in 2018. “The time I have spent working on this piece has been very much an exploration of the textural qualities in the materials used, As an artist, I desire most to produce pieces that exhibit vulnerability and provoke intrigue” explains Roinson.

Deliasofia Zacarias received her Bachelor of Arts in Studio Art and Business Administration from Trinity University in San Antonio, TX and is currently a LEAP Fellow at the LA County Museum of Art and is co-founder of Unfiltered San Antonio. “In these journals, I sew phrases onto talavera-painted fabric. These phrases build up my own perspective and trajectory of self-discovery and identification” states Zacarias.
December 2019 Dock Space and Dock Space Gallery Annex
Dock Space Gallery -  Gary Sweeney and Alexis Mabry,   It Comes with the Territory
Dock Space Gallery Annex -   Diana Kersey and Linda Rael,  Designs of Life